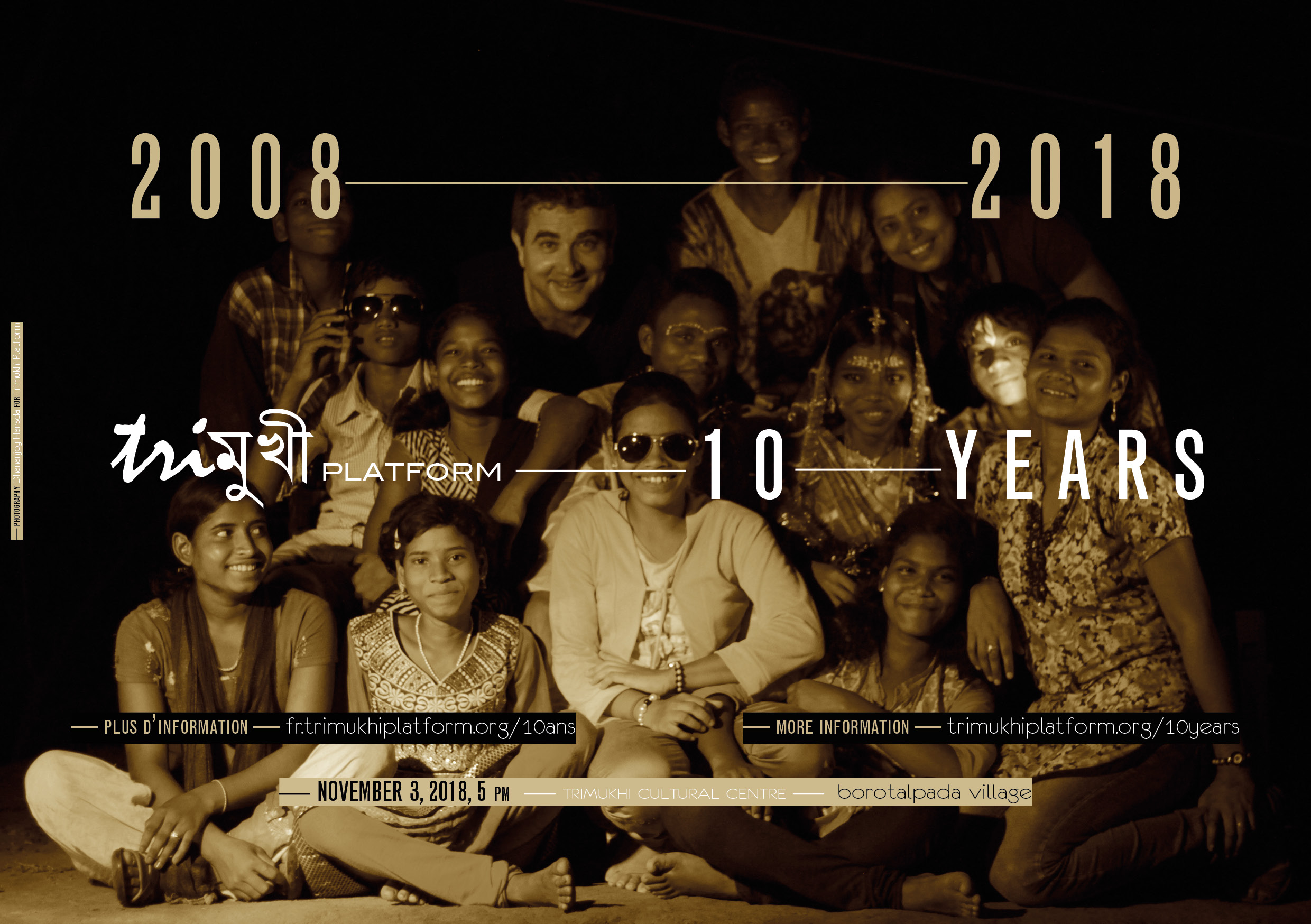 In 2018, Trimukhi Platform celebrates ten years. Below you find some moments and events of this singular and joyous adventure that began with a few Santhal dance steps, one morning of August 2008, in the village of Borotalpada.

On November 3, 2018, in the company of friends from the village of Borotalpada, the cities of Kolkata, New Delhi, Paris and Marseille, the organisation co-founded by the French theatre director and philosopher Jean-Frédéric Chevallier, the Indian social worker and producer Sukla Bar and 18 Borotalpada families, Trimukhi Platform celebrated its 10 years of activity in the tribal area of Jhargram, West Bengal, India.

The event was simple and joyful. During the train journey, each audience was invited to seat alone by the window for a brief performative act and remember where she or he was 10 years ago, how far from Borotalpada. Few hours and many kilometres later, after the Santhal ladies from the village washed the feet of the arriving guests, everybody went down to the lake to watch the 2018 Trimukhi Platform theatre performance happening in the water: জল ই জীবন । la vie dans l’eau. Back at Trimukhi Cultural Centre, were showcased drafts of a video and photography exhibition and of a sound art installation, prepared by two young Santhals from the team. Then, as this out of the common aventure began one morning of 2008 with a few Santhal dance steps, it was time for an anniversary celebrating dance: following the rhythm of tamak and dumsa drums, everybody, from the village as from the cities, joined and moved together. Around midnight, after a massive (250 persons) but delightful dinner, video extracts of the works done since 2008 (dance-theatre performances, photography workshops, construction of the cultural centre, nights-long festival of contemporary performing arts) were projected on the wall of a newly build mud house while, in the Cultural Centre, the youth was dancing again and some others, older, conversing. Everybody smiling: who, 10 years ago, would have believed that this creative experiment where tribal farmers and artists from Europe, Asia, North and South America working together will continue bearing so tasty fruits?

⊥ BOROTALPADA ¬ Trimukhi Cultural Centre (TCC)
If Each Day I Love You More One Day Will I Explode? ⌊sound happening⌋
Essay on Seasonal Variation in Santhal Society ⌊dance-theatre⌋
Try Me Under Water ⌊night wandering⌋

In February, the Cultural Center is repainted with red and black clay, and the inside walls wish white mud and ashes.

In July, a tin roof is put to cover the TCC.

In March, the TCC is badly damage by Cyclone Phailin…

Construction of the TCC goes on…

⊥ BOROTALPADA ¬ in the jungleOn October 28, 2011, after almost a year of talks -usually under the form of village assemblies- the construction of Trimukhi Cultural Centre (TCC) starts. A piece of land is chosen, the place is cleaned and a Santhal ritual performed. A local priest give instructions for the orientation of the building: it has to be facing south. A first draft is marked on the ground with strings and later with ashes. Then the foundations are dug.

⊥ BOROTALPADA ¬ in the jungle
On December 31, 2010, a village assembly takes the decision of building Trimukhi Cultural Centre.

TRY ME UNDER WATER

IF EACH DAY I LOVE YOU MORE, ONE DAY WILL I EXPLODE?

THE THING THAT EXISTS WHEN WE AREN’T THERE