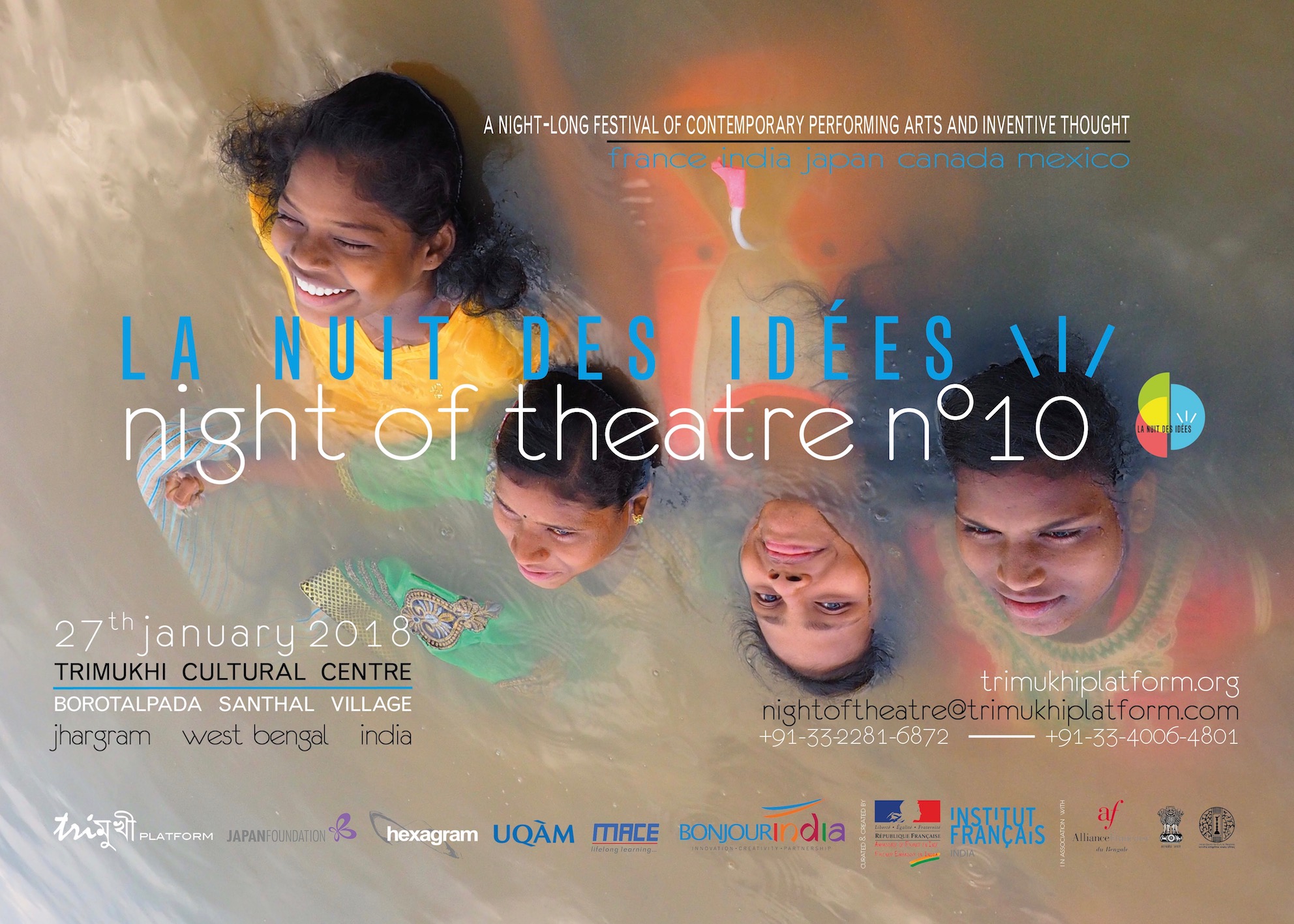 Night of Theatre n°10 • La Nuit des Idées, amazing night-long festival of contemporary performing arts and inventive thought, took place on January 27 2018 at Trimukhi Cultural Centre in the Santhal tribal village of Borotalpada, West Bengal, India. Artists and philosophers from France, India, Japan, Canada and Mexico together with actors, dancers and musicians from Borotalpada village both showcased in situ sound, theatre, dance or dance-theatre performances and evolved in philosophical proclamations as well as in stimulative discussions about “flows of intensity”… before inviting all to join for a joyful dinner and then for a  joyful multicultural dance party until the sun rise again… This event was part both of Institut français’ international Nuit des idées (“Night of Ideas”) to celebrate all over the world the stream of ideas between countries, cultures, topics and generations, and of Bonjour India, a four-month-long celebration of Indo-French innovation, creativity and partnership. Read the editorial in The Telegraph →

Read the report in The Tmes of India →

Read the story in India Today →

Read the announcement in The Telegraph →

ATANG DARAM • ONE DAY WILL I EXPLODE?

ATANG DARAM • ONE DAY WILL I EXPLODE? santhal ritual of welcoming + sound installation

WHAT MOVES YOU? part 1

THE NIGHT OF THEATRE 10th ANNIVERSARY

RESKE ÉNÈD • WHAT MOVES YOU? part 2

by Masayuki Taga (Consul General of Japan in Kolkata) and Kaoru Miyamoto (Director-General of The Japan Foundation, New Delhi) translation by Boro Baske

THE IMPROBABLE JOY part 1  diner for 300

On 31st January 2018, 7 pm, at Alliance Française du Bengale as part of the French programme at Kolkata Bookfair

Trimukhi Platform‘s concern for questioning the contemporary ways of fabricating and enjoying arts works has taken a double shape: the organisation of a night-long festival in Borotalpada village and the publication of a bilingual journal in Kolkata. In this context, Nicolas Idier (Book office, Institut Français in India) and Jean-Frédéric Chevallier (Trimukhi Platform) invited Anjum Katyal (India) to discuss about the dynamics at the heart of Trimukhi Platform French-Indian publication Fabrique de l’art • Fabricate (Fabric of) Art and Barbara Cassin (France), Elodie Guignard (France), Marc Hatzfeld (France), André Eric Létourneau (Canada), Ikue Nakagawa (Japan), Fabrice Plançon (France, India) to share their thought after their experience in Borotalpada village for Night of Theatre • La Nuit des idées. To enrich the evening, after an introduction by Masayuki Taga (Consul General of Japan in Kolkata), Ikue Nakagawa (Japan) performed a solo dance she created few days before in Borotalpada village for Night of Theatre n°10 • La Nuit des idées and to stimulate the production of thought, wine was offered by the General Consulate of France in Kolkata.