“We usually believe that it is the spider that spins its web, but it might be also the web appearing in the early morning light that makes the spider work. After all, what do we know about it? Similarly, isn’t this Cultural Centre in Borotalpada that weaves a network of relationships between Santal peasants, artists and intellectuals from Calcutta, donors from France, Germany, Spain, India and else where, Mexican, Bengali or French project designers, children playing at the edge of the forest and the village? So let us be weaved together by the Cultural Centre in progress: to each one his part, his time, those who knead the clay, those who bring their fifty euros or their thousands rupees, those who draw the plans, those who impulse, those who are still travelling and those who start to dance already. The first work of this Centre is the fabric of emotion, intelligence, generosity and dream that makes shine this little piece of world under the light of a new dawn.”

Borotalpada is a Santhal village in West Bengal, India, 240 km South-West of Kolkata. Sukla Bar and Jean-Frédéric Chevallier have been working there since 2008, forging friendships with the village community. Time spend and long conversations with many made it appeared that an ambitious project could be launched: a Cultural Centre dedicated to contemporary art works. The construction process started in October 2011.

Once the rainy season was over the construction of the Cultural Centre started. It was on 28th October 2011, after almost a year of talks -usually under the form of village assemblies-. A piece of land was chosen. The place was cleaned and a Santal ritual performed. A local priest gave instructions for the orientation of the building: it had to be facing south. A first draft was marked on the ground with strings and later with ashes. Then the foundations were dug.

About eighteen families with whom Trimukhi Platform was working closely since four years became part of the organisation. They were the main people for the construction: sharing their traditional knowledge. They gives their free time to work on the building. Part of the material (mud and bamboo) was also provided by the villagers. The rest of the material as well as the food and the fees for extra skilled professionals was covered by a donation campaign that Trimukhi Platform organised.

From 2012 onwards, almost all the Trimukhi artists guests helped and worked on the construction: Alejandro Orozco and Hector Bourges from Mexico, Marc Hatzfeld from France, Nathalie Buenaventura and Paola Torres from Colombia.

In October 2013, the Cultural Centre got badly damage by Cyclone Phailin. Thanks to donations received, repairing works started on 6th January 2014. In May 2014, French architects Florence Bougnoux and David Mangin visited the building and helped with concrete advices. By end of July 2014, all the walls were repaired and the installation of a tin roof on the top of the main building completed as well as above the veranda. In December 2014, the office room was put down and converted in a platform. A Trimukhi platform…

THE CENTRE AT THE PERIPHERY

The idea of this project is to create a centre of culture at the far periphery. A recent U.N report underlined it: India ranks 134th position in term of human development out of 187 countries. In fact, in the past 20 years the inequalities have been increasing in the sub-continent. There are those who are in the geographic centre (and at the top of the society) and there are all the others who are at the periphery (and at the bottom of the society). Usually a Cultural Platform is built in a “posh” area (or hight middle class zone) and in a big city. Here, it is about to do exactly the opposite: to situate the Centre in a remote village with no particular economic resources. And to do it in such a way that those who coordinate this platform will be those who habitually do not coordinate anything -because they are peripheral peoples-. Actually, it is very interesting to listen the desires of each one in Borotalpada village regarding the artistic activities they wish to have implemented. On one hand, there is the strong desire to keep alive cultural singularities and, on the other hand, there is the interest to discover other forms of practices and knowledge: for architecture or agriculture, for painting or singing, for acting or dancing, there are, at the same time, the desire to go deeper in one’s own uniqueness and the desire to be enriched by the multiplicity -one feeding the other.

One other word that is highly important here: platform -both a space for encounters, sharing, crossing and a place from where to jump, rush and find the strength to continue-. It is very significant that the inhabitants of Borotalpada had chosen with the money collected to start with the construction of the building instead of buying an extra land. It was needed first a place to receive, to speak one to the other, to know each other better. And also it is significant their disposition to participate in projects that imply to travel out: the idea of ex-posing oneself in other places likes very much. 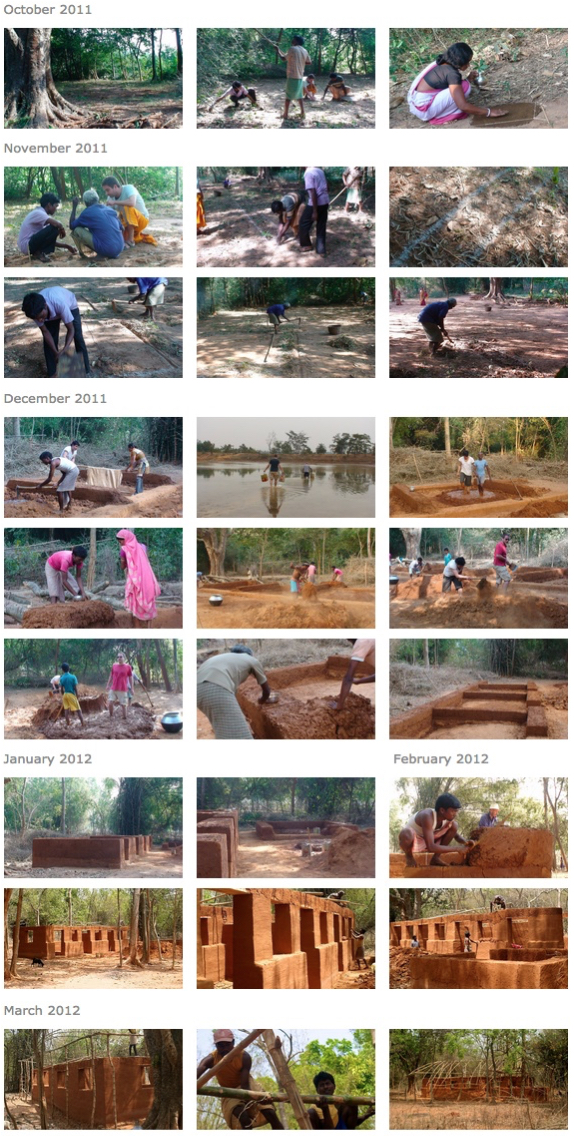 GIVING LIFE TO A CULTURAL CENTRE

On 12th July 2014, after signing an agreement with Barcelona Theatre Institute (Spain) to receive Master Degree students for final practice, Trimukhi Platform started an innovative educational program aimed at giving to 10 young people in Borotalpada village the tools and knowledge necessary to undertake important responsibilities in the Cultural Centre. The second session courses took place in December 2014, with the collaboration of a postgraduate student and a professor from Jadavpur University, Kolkata, India. The third session took place in May 2015, with the participation of the musician Sudipto Shekhar Mridha and the thespian Naireet Basak. In a non-academic way, both worked on introducing the Santal youth to computer and internet. At the end of the learning process, the youth followed also the Online workshop: Visions of the land in India (and elsewhere) by French anthropologist Marc Hatzfeld. The fourth session was held in October 2015 with sounds exploration activities leaded by Sudipto Shekhar Mridha and conversation about poetic of the land proposed by Marc Hatzfeld.

Before that, in August, September and October 2014, some of the village students from these sessions organised in an autonomous manner 3 hours daily class to help Borotalpada children with their study. The Centre has been also used as a night shelter for the youth who do not find enough space in their one room family house.

Trimukhi Platform has started an innovative program aimed at giving to 10 young people in Borotalpada village the tools and knowledge necessary to undertake important responsibilities in Trimukhi Cultural Centre. The 1st session courses in July 2014 was given by Yazel Parra Nahmenes from Barcelona Theatre Institute (Spain), Jean-Frédéric Chevallier and Sukla Bar Chevallier from Trimukhi Platform; the 2nd session in December 2014 by Utsarjana Mutsuddi and Sanmoy Karmakar from Jadavpur University, Kolkata (India). The 3rd session was held in May 2015 and the 4th in October.

Which projects to set-up in Trimukhi Cultural Centre? What are the desires of the village community members? What are the needs also? And what to invent? How to concrete each project? Who are the people responsible for this activity or for that one?

What are the different ways to do art nowadays? How to build an art program open to the diversity of propositions that exists? How to maintain the quality of each production? How to speak in a microphone? What to tell to the audience? How to speak about art creations? Which words to use? What does a piece of art produce in us? As most of the artist guests come from Latin America, why not to learn Spanish so to be able to talk more with them and to understand better what happens during our rehearsals? As each year the sound system we contract is bad, why not to learn ourselves to manage it properly?

These are some of the many questions that Trimukhi Platform tries to attempt during the Crash Courses sessions on Arts and Cultural Projects organisation.

The first session was held during ten days in July 2014 at Trimukhi Cultural Centre. 10 teenagers and young adults from the Santal tribal area were attending the daily classes, starting at 8 am and concluding at 6 pm:

As a concrete result of this first session of courses : from 28th July to 20th October 2014, 3 hours’ class were held daily in Trimukhi Cultural Centre to help Borotalpada children with their study. The project was organised in an autonomous manner by the local youth of the Santal village with the support of the local primary school.

The second session courses took place at Trimukhi Cultural Centre during 7 days in December 2014. The program, starting at 8:30 am and concluding at 8:30 pm, was:

The third crass courses session (on computer and Santal dances) took place from 22nd to 30th May 2015, with the participation of the musician Sudipto Shekhar Mridha and the thespian Naireet Basak. In a non-academic way, both worked on introducing the Santal youth to computer and internet. At the end of the learning process, the youth followed also the Online workshop: Visions of the land in India (and elsewhere) by French anthropologist Marc Hatzfeld.

The fourth session was held in October 2015 with sounds exploration activities leaded by Sudipto Shekhar Mridha and conversation about poetic of the land proposed by Marc Hatzfeld. 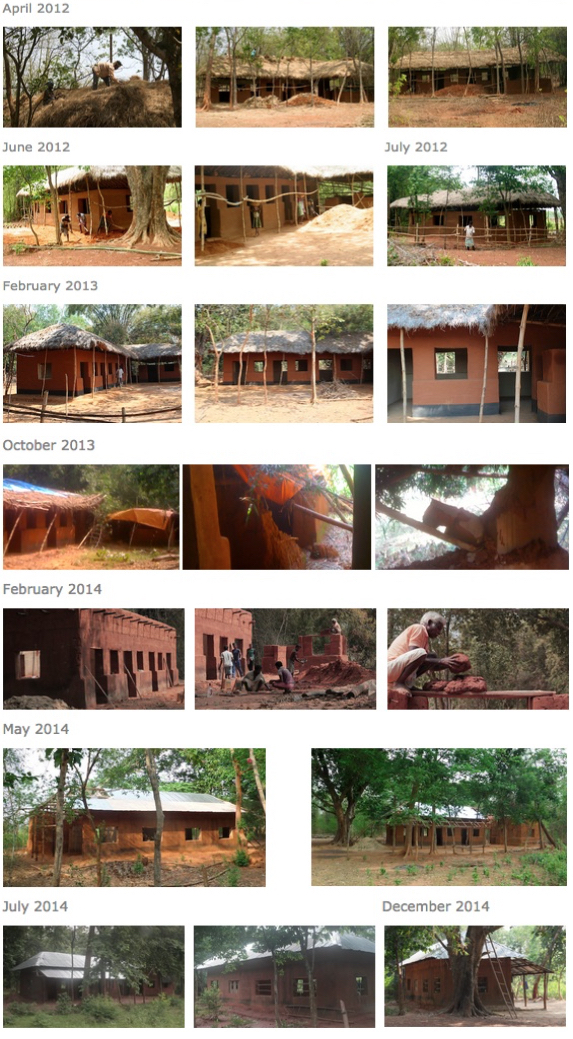 One night in late May 2020, a week after the passage of Cyclone Amphan (against which the Cultural Centre had resisted rather well), nasty winds blew off the roof… again…