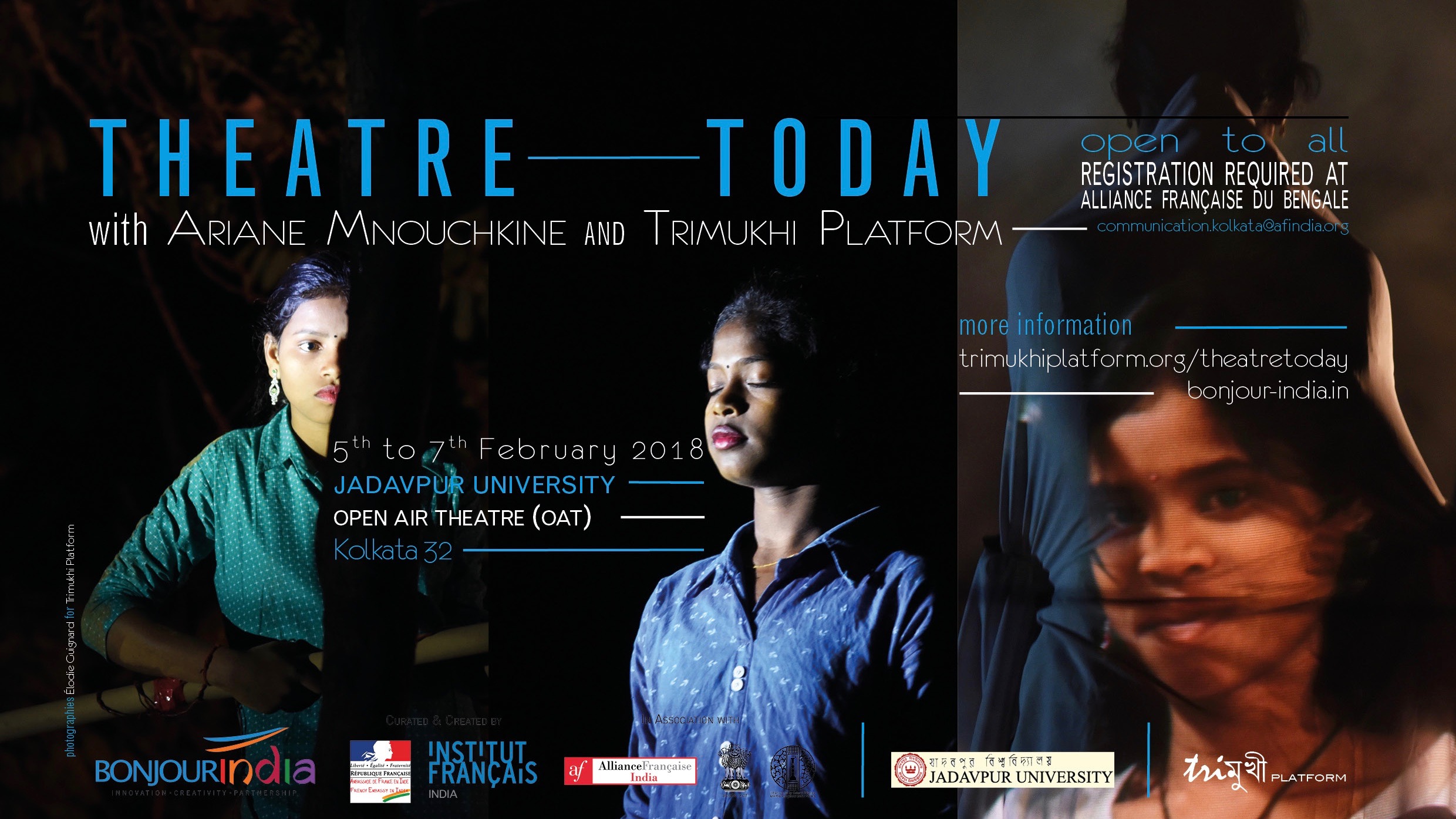 From 5th to 7th February 2018, in an effort to promote collective creation between France and India, students, artists, and intellectuals from West Bengal and India were invited to spend three days at Open Air Theatre (OAT) in Jadavpur University with French stage director Ariane Mnouchkine and French-Santhal-Bengali organisation Trimukhi Platform. In the evenings, participants attend a double theatre performance. The first – Essay on Seasonal Variation in Santhal Society – awakens spectators’ thoughts and senses. The second – Try Me Under Water – invites the audience to go deeper in the contemplation and even loose ground. The nocturnal wandering at JU campus concludes with a multi-track video projection reflected on the water. During the day, participants joined Ariane Mnouchkine and Trimukhi Platform in creating a free and friendly discussion space which encourages questions about theatre today, such as this one: How do we do the theatre we do? The three days event logic was concrete and practical: a moment here with Trimukhi Platform and a moment there with Ariane Mnouchkine, then a moment here again, then a moment there again until finally opening a creative dialogue. This festivity of today theatre diversity – and by hence huge spectrum of possibilities – was part of Bonjour India, four-month-long celebration of Indo-French innovation, creativity and partnership.

⇒ download the published transcription of the 3rd day conversation 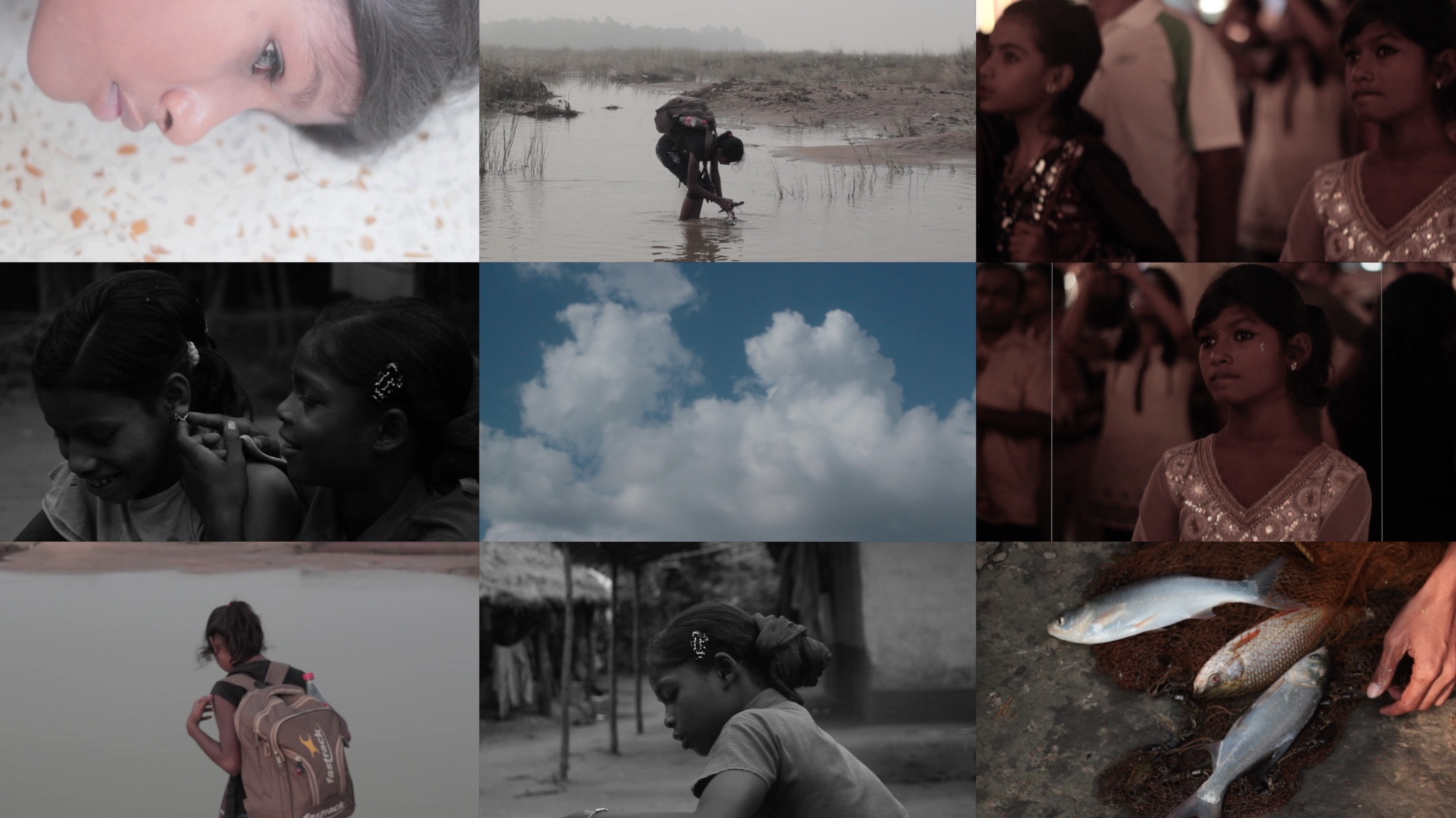 introduced by Damien Syed (Consul General of France in Kolkata) and moderated by Jean-Frédéric Chevallier (director of Trimukhi Platform), the first talk took place on Feb 6 2018 from 11 am to 1 pm

moderated and translated in Bengali by Samantak Das (Head of Comparative Literature Department, Jadavpur University), the second talk took place on Feb 6 2018 from 3 pm to 5 pm

moderated and translated in Bengali by Samantak Das (Head of Comparative Literature Department, Jadavpur University), the dialogue took place on Feb 7 2018 from 11 am to 1 pm

⇒ download the published transcription of the 3rd day conversation

Ariane Mnouchkine (born 3 March 1939) is a French stage director. She founded the Parisian avant-garde stage ensemble Théâtre du Soleil in 1964. She holds a Chair of Artistic Creation at the Collège de France, an Honorary Degree in Performing Arts from the University of Rome III, awarded in 2005,  and an Honorary Doctor of Letters from Oxford University, awarded 18 June 2008.

Mnouchkine is regularly ranked as one of the world’s most influential directors, the only female winner of the international Ibsen award, whose productions – 20-odd in the last 48 years – are often spoken of in awe. Soon after the événements of 1968, Théâtre du Soleil exploded to attention with its rough-and-tumble devised works 1789 and 1793, which brought the history of the French revolution to scandalous, shocking life. Their cycles of Richard II, Twelfth Night and Henry IV (1981–84) reached an estimated 250,000 people, fusing Shakespearean history with stylised imagery drawn from Japan, Bali, India, then a four-part odyssey into Greek tragedy, Les Atrides (1990–92), that blended Kathakali with kabuki.

Always restless, Mnouchkine has sometimes made migration itself her subject: 2003’s Le Dérnier Caravansérail (The Last Caravan Stop) dramatised the experience of refugees from Kurdistan, Chechnya, Iran, Russia and a flurry of other countries into an extraordinary six-hour experience that featured no fewer than 169 characters. In French, the word spectacle is simply the offhand word for “show”, yet Théâtre du Soleil interpret it literally – they seem unable to make theatre that is anything less than epic.

⇒ read more in The Guardian

“Trimukhi Platform is not simply a theatre company; it is the set up for a total experience. It constantly interrogates those who go through it about what they are actually attending to. On the one hand, the two parts performance Essay on Seasonal Variation in Santhal Society and Try Me Under Water I saw in Borotalpada village was contemporary theatre at its best, which means not the live adaptation of a text, but rather a kind of choreography of live audiovisual effects in a real space, using all the elements by which a scene can be produced today: video, sound, performances, voice, song, lights, etc.

There were, however, a few differences. First, it was not staged in a theatre room, but at the edge of a village. There is a stage in front of Trimukhi Cultural Centre but the performance constantly overflows its supposed limits. At one time it appears on the side, and it goes behind the spectators, and then again we have to follow it down to the nearby lake where a screen waited for us in the water. And there another, more significant difference. Those young men and women who perform here are delegated by the villagers to give these performances. This is not simply a show; it is life continued. Performers don’t try to play at being anyone else; they are exactly what they give us to see. They are young Santhal villagers and true contemporary artists. They belong to (at least) two worlds at the same time. In the very confusion in which we all find ourselves at this moment, a common place is cleared. Starting from this experience, the very question of our differences can now be raised.

Trimukhi Platform is made for that: so that differences be not anymore given borders between already existing groups, but lines of fault that traverse each one of us. In a globalised world, Trimukhi represents an alternative to the standardized devastation of the world. Not because it vindicates the purity of each particularity; Trimukhi does not bother with authentic ethnicity and what it offers could very well exist in the best international festivals. But it creates a common ground that is not preempted by one interpretation. For this reason we can say it is “global”. The global is not one and the same reality for everyone. The global is what we have to share and that in which we have to replay our differences. I think I have witnessed maybe for the first time in my life what global art of the future might look like.“