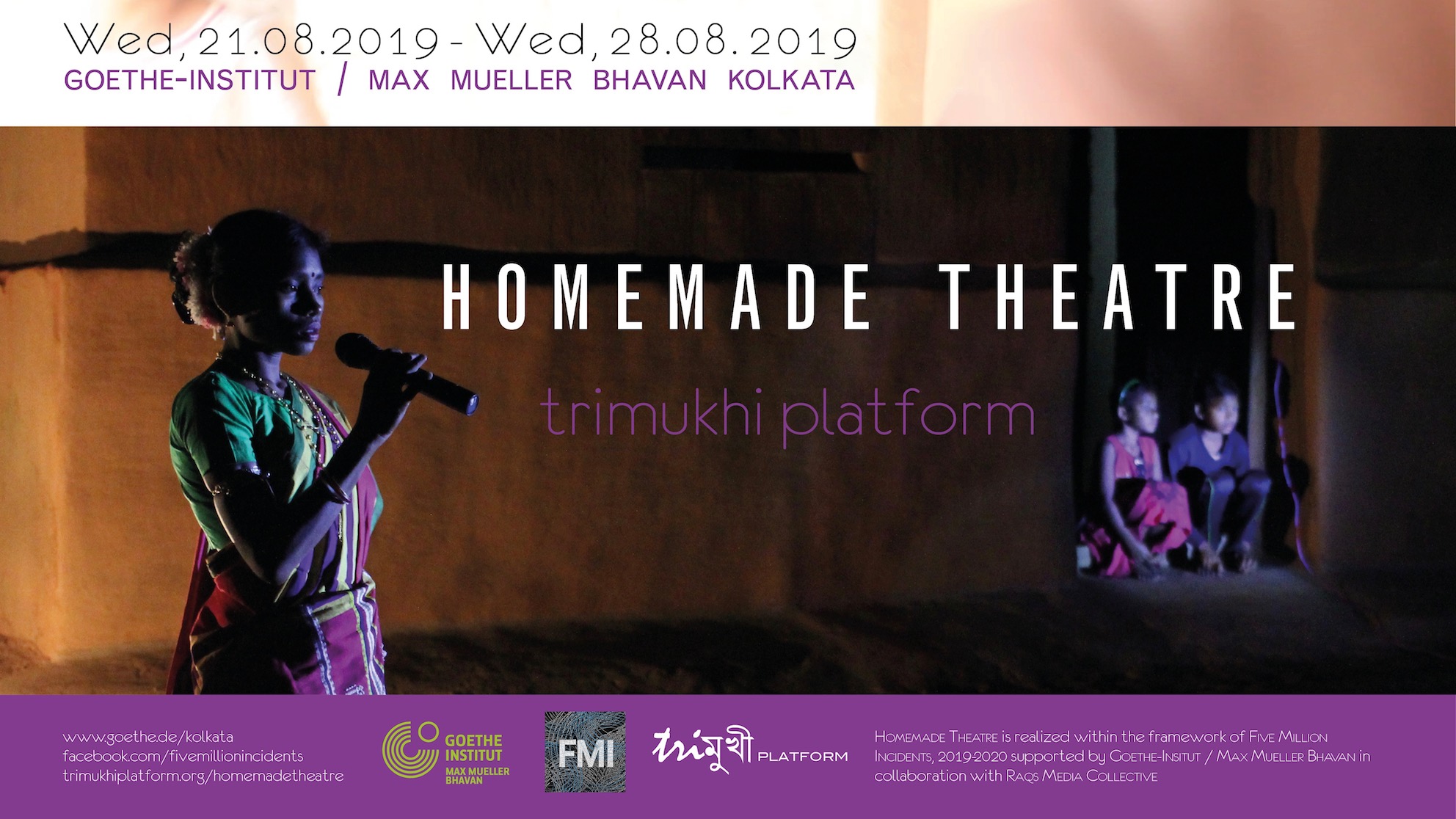 HOMEMADE THEATRE is an in-situ theatre-dance-video performance in Santhali, Hindi, Bengali, English and French involving seven Santhal, one Bengali and one French artist from Trimukhi Platform. They explore the possibilities offered by the building they work in front of, or well inside — that is to say: the building they make their home, using its wall surfaces for video projections, its angles and corners for body movements, its floors for proclaiming texts by philosopher Gilles Deleuze, writer Peter Handke and novelist Gao Xingjian. First sketched outdoor, in the garden of French Institut, New Delhi on 31.01.2019 during La Nuit des Idées and indoor, at Ashoka University on 01.02.2019, HOMEMADE THEATRE was premiered in Borotalpada village on 02.03.2019 during Night of Theatre n°11 in front of a majestic mud house recently built in the Santhal village. The performance was showcased again on 19.03.2019 in front of the Centre for Adivasi Studies and Museum, Vidyasagar University. It was finally showcased five times inside Goethe-Institut / Max Mueller Bhavan Kolkata, in the entrance hall, corridor, library and terrace, from 19.03.2019 to 28.08.2019, within the framework of Five Million Incidents, 2019-2020 supported by Goethe-Institut / Max Mueller Bhavan in collaboration with Raqs Media Collective.

the performance at goethe-institut

the open discussion at goethe-institut (after the performance)

premiered on March 7, 2019 in front of a majestic mud house in Borotalpada village during Night of Theatre n°11, the performance was showcased again outdoor on March 19, 2019 in front of the Museum of Tribal Cultures at Vidyasagar University and indoor at Goethe-Institut / Max Mueller Bhavan Kolkata from August 21 to August 28, 2019 during Five Millions Incidents, 2019-2020

the performance in borotalpada village

Still February 2019, same Borotalpada village, but another day,  late in the afternoon: Sumita Besra and Ramjit Hansda tried a new combination of movements, different  from what they settled to do in New Delhi in the Garden of  French Institut for La Nuit des idées 2019.

first sketch of the performance at institut français

first video projected during the performance

second video projected during the performance

⇒ Read stories in the Press