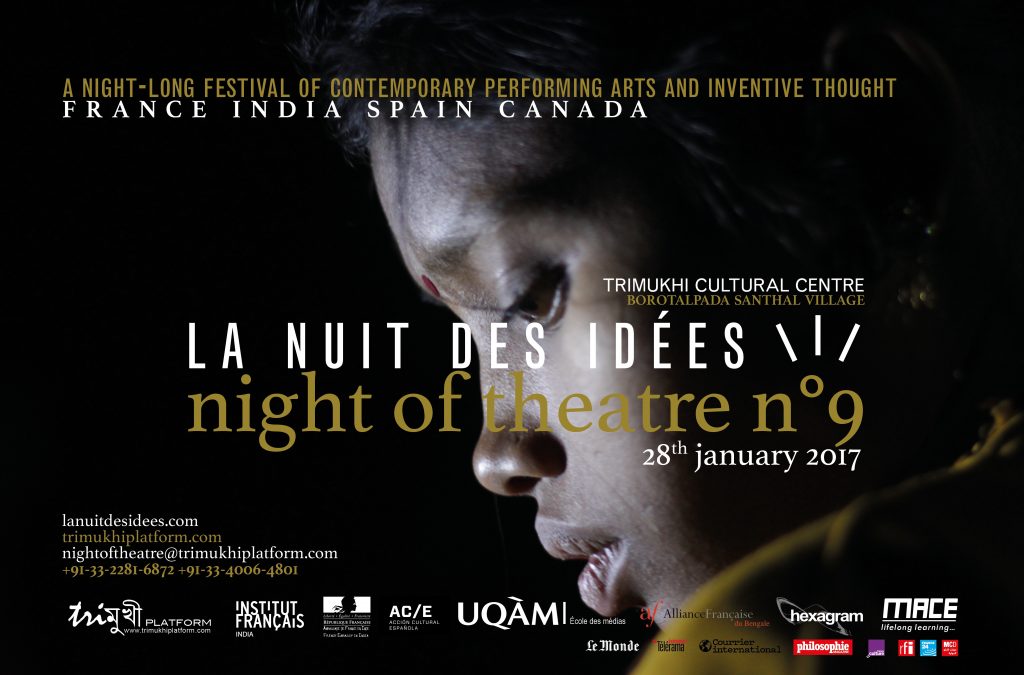 The Night of Theatre n°9 / La Nuit des idées, a night-long festival of contemporary performing arts and inventive thought, took place on Saturday 28th January 2017 at Trimukhi Cultural Centre in the Santhal tribal village of Borotalpada, West Bengal, India. During the night-long event, artists and scholars from Kolkata, Paris, Madrid and Montréal, together with Santhal actors, dancers and musicians both showcased in situ performances and evolved in stimulative conversations about art and thought. The night-long program ended with a joyful multicultural dance party. 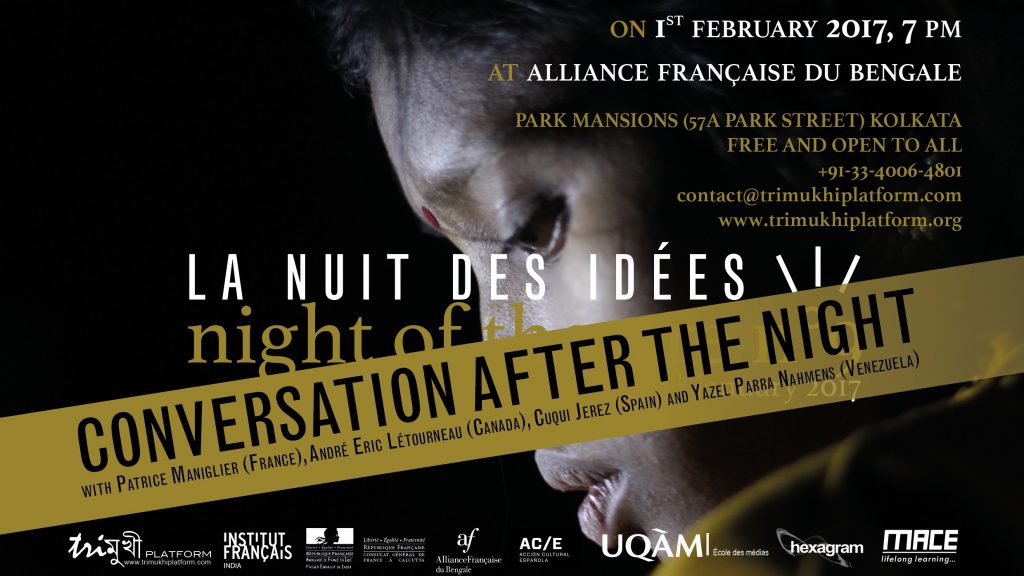 Conversation after the Night (2017)

Conversation After the First Dry Rehearsal in March 2016

On 16th March 2016, at Alliance Française du Bengale, Kolkata, Jean-Frédéric Chevallier (Trimukhi Platform) invited Suvojit Bagchi (The Hindu newspaper) and Samantak Das (Jadavpur University) to share their thought after their experience in Borotalpada village. This was part of a dry rehearsal for Night of Theatre n°9 that took place on 12th March 2016 at Trimukhi Cultural Centre in Borotalpada village.

The Nights of Theatre in Press and Media

Reporting for The Telegraph on the 2014 edition of the Night of Theatre, journalist Mohua Das wrote: “There was something magical about making one’s way through the backwoods and settling down under the open skies, feeling the caress of a wintry breeze and watching performances in the dark — imaginative and untamed. Our sense of disorientation was pushed to the limit: the stage was amazingly innovative and there was a constant effort to tickle the senses.”

Coming back from the dry rehearsal at Trimukhi Cultural Centre in March 2016, journalist Mrinmhoy Nandi from Kaahon.com, observed: “Jean-Frédéric Chevallier advocates the idea of not restricting theatre to any defined space. This enables him to explore multiple possibilities and push the boundaries of the form. However, it is important to avoid the mistake of considering the elements to be theatre itself! And his idea of theatre is of presenting than representing…“

The Time of India

Reporting for The Time of India, journalist Rakhi Chakrabarty wrote: “Across the Subarnarekha, where the road ends and rolling fields spread out against the sky, is a sleepy Santhal village called Borotalpada. On Saturday, the remote Adivasi village in West Midnapore district was buzzing with activity. For, it was a Night of Theatre. A theatre with home-grown actors. A theatre of the soil. A contemporary theatre, directed by Jean-Frédéric Chevallier, a French professor (of theatre and philosophy) who has made Kolkata his home since 2008. Chevallier’s is a theatre of the present, where life will be presented, not represented; theatre where life unfolds as life as we experience it.”

Reporting for Kaahon.com, journalist Meghna Nandi observed: “Jean-Frédéric Chevallier emphasizes upon the significance of contemporary art and theatre. He describes the performances he directed as a counterpoint to the more traditional notions; stripped off the need to build up a sense of drama on stage. He articulates them as a binary of re-presentation in the past and simply presentation in the contemporary times. In fact, underlining the importance of the present lived experience of the performances; he even theoretically calls them: “Theatre of Presenting”.“

The Past Nights of Theatre in India and Mexico 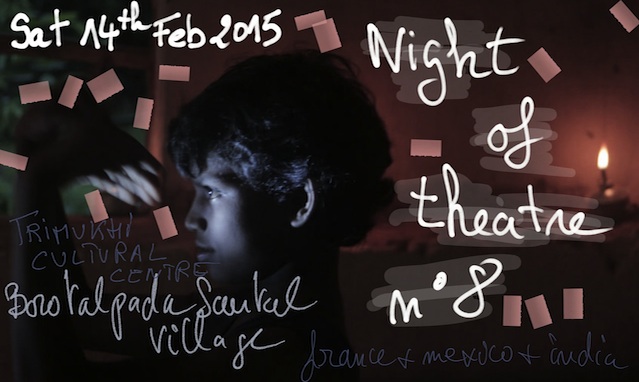 The Night of Theatre n°8 was held on 14th Feb 2015 at Trimukhi Cultural Centre in the Santhal tribal village of Borotalpada (West Midnapore, West Bengal, India). During the night-long event, artists from La Habana, Paris, Kolkata and Mexico city, together with tribal actors, dancers and musicians showcased in different places around and inside Trimukhi Cultural Centre, theatre, music and dance performances as well as a double sound installation and happenings. For this 8th edition, a reduced number of guests audience from Kolkata was received so to favor exchange and dialogue with the villagers. The program ended with a multicultural dance party. The bus returned at 5:45 AM. + More…

The Night of Theatre n°7 took place on 15th February 2014 at Trimukhi Cultural Centre. Artists from Paris, Bogotá, Kolkata, Mexico city and Borotalpada village presented outside the Centre theatre, dance and music performances as well as an experimental film. Two of the performances were the result of a 12 day rehearsals process together with 15 villagers. Journalist Mohua Das reported the event for The Telegraph: “There was something magical about making one’s way through the backwoods with torchlights and settling down on the ground under the open skies, feeling the caress of a wintry breeze and watching performances in the dark — imaginative and untamed.”  + More… 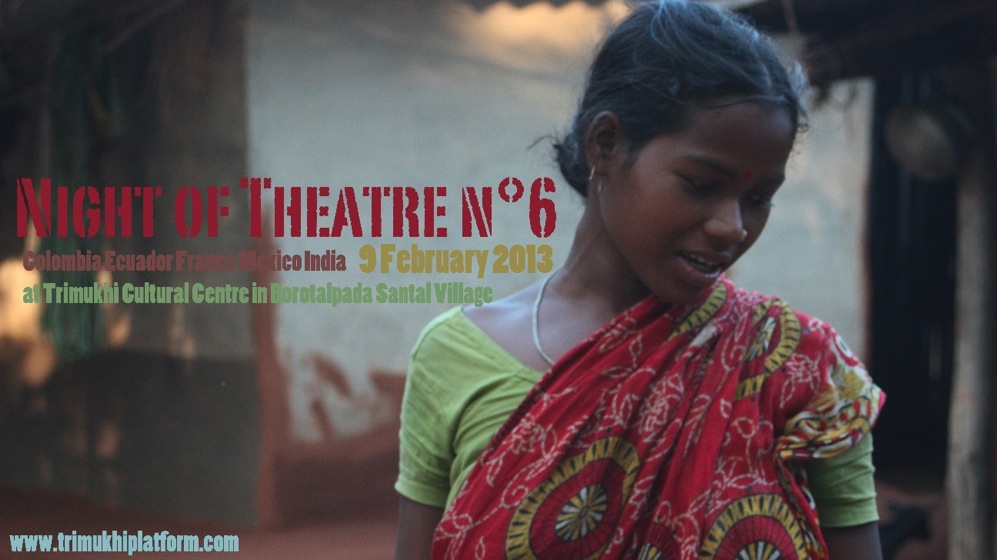 The Night of Theatre n°6 was held in West Bengal, India, on 9th February 2013, at the upcoming Cultural Centre that Trimukhi Platform has been building in the Santhal village of Borotalpada. It involved theatre, dance, music, installation, photo exhibition and video projection. Artists from India, Europe and Latin America rehearsed together with painters, photographers, dancers, musicians and actors from the tribal area to prepare the 12 works that had been shared in situ during the night-long festival. +More… 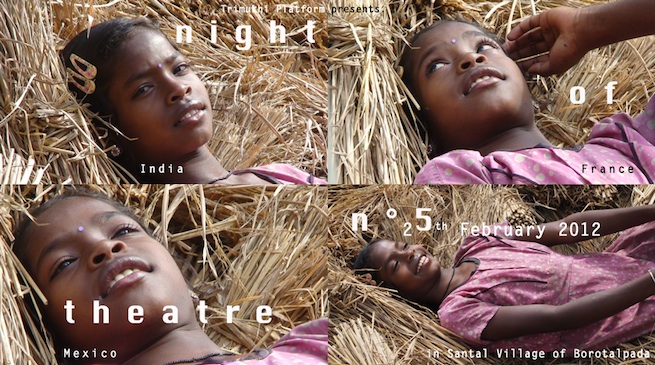 As a first activity in the Cultural Centre in construction, Trimukhi Platform in collaboration with Proyecto 3 (Mexico), MACE (India), CONACULTA (Mexico) and Teatro Ojo (Mexico) organized on 25th February 2012 in the compound of the building in process the Night of Theatre n°5: a night-long program with stage works performed by groups composed with artists from different social worlds and geographic continents. It was a way to show that it is possible to bring up a project of high quality art creation among those who normally cannot access as spectators and as makers such a kind of professional platform. + More… 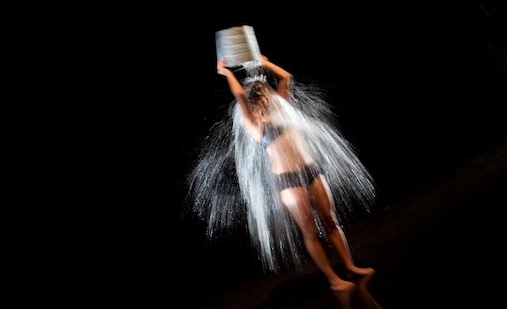 Produced by the National Mexican Fund for Art and Culture and the National University of Mexico, organized by Proyecto 3, with the collaboration of Trimukhi Platform the Night of Theatre (Noche de Teatro) n°4 took place on 5th September 2009 in Teatro UNAM, Mexico City, from 7 pm to 7 am. It was the première of 4 theatre performances directed by Rubén Ortiz (Mexico), Jean-Frédéric Chevallier and Matthieu Mével (France, Italy, India), Víctor Viviescas (Colombia) and Joseph Danan (France). Between each play, a musical performance was proposed by Rogelio Sosa (Mexico). + More…